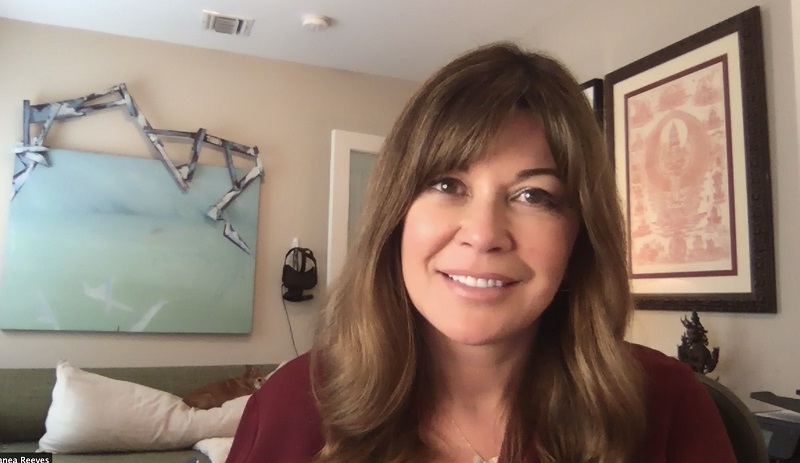 What’s Ahead for At-Home Fitness?

Meditation has become one of the most buzzworthy wellness practices within the decade. It was once a mystery for many in the Western world, but eventually became more accessible thanks to apps such as Calm and Headspace, the latter of which was turned into an interactive Netflix show.

Tech leader and entrepreneur Nanea Reeves has taken an elevated approach to meditation by introducing VR/XR meditation app TRIPP to the masses. Reeves wasn’t even sure if the company was going to make it at the start of the COVID-19 pandemic, but TRIPP managed to acquire $11.2 million in Series A funding this June and $11 million in 2021. “Right at the beginning of it [the pandemic] there was so much fear in the financial environment, very similar to what’s happening now. We had two term sheets pulled and I didn’t know how we were going to survive the next six months without getting more money. It was really important for me not to give up during that time,” she told Athletech News. Eventually, Reeves stated that she saw her company’s traffic count rise “because people were really connecting to our product offering during a time of great stress for the entire world.”

“It was really a huge growth period for me as a CEO,” she added.

It was also substantial proof that Reeves was onto something of significance in the VR/XR and mental health spaces. After experiencing a difficult childhood coupled with the death of her sister and husband, the former early investor of Oculus turned her pain into inspiration with TRIPP. Now she’s taking note of the parallels between the psychological comfort she found through technology, gaming and meditation in her youth and TRIPP users experiencing the same with the app. Reeves contemplated this and more with Athletech News for our CEO Corner series.

Athletech News (ATN): Tell us about your background

Nanea Reeves: My background to come to working in the tech industry is really an organic evolution. I started off very interested in tech and video games early on. I was one of those kids that took apart the TV just for fun, much to the chagrin of my parents. I always wanted to know how things work. This is why throughout my career, as it advanced, I’ve been very vocal about why I believe female children should play video games (positive benefits include increased spatial reasoning skills; the ability to multitask).

For me, playing video games led me to want to know how they work and I started mucking about with computers very early on as a result. I’m completely self-taught  — I don’t have a computer science degree, although I like to joke that everybody who works for me does. [laughs] Just that basic understanding of how things work, how software development works, how to run live services, it’s really been an amazing journey of curiosity for me to figure out how to get things done.

Nanea Reeves: I started off coding mostly for fun. I was doing some front-end coding for websites back in the day. Living in Los Angeles my friends and I were suddenly very busy coding movie websites and a lot of people didn’t know how to produce this stuff. Now it’s so much easier to even create your own. During that time we found that there was just this organic evolution of a career that unfolded. It was a lot of fun. There was a lot of energy in Los Angeles tech back then. This was in the late ’90s. That led me to working [in the] very early days in mobile gaming. There was a venture fund created by Sprint and an incubator called eCompanies and I happened to be an employee at a mobile gaming company they funded called JAMDAT. I ran product and ultimately I ran tech at that company and operations. We went public and we ended up getting acquired by Electronic Arts and it was really a game-changer for me and my career to take a company from an idea [and] being [a] part of a team that really hit a homerun with it.

Being a female definitely has its challenges as a CEO and focusing on the category of virtual reality, until only recently with the excitement around the metaverse conversation, was like pushing a boulder up the hill. I had to make sure that I had the right counsel, the right coaches, [and] the right inside voices to stay the course because I believed in our (TRIPP, Inc.) mission to use technology for good.

ATN: Please tell us about your current company and how either your role or the company (if you are a founder) came to fruition

Nanea Reeves: TRIPP really came out of a long journey of a mindfulness practice that I was gifted from a mental health professional when I was around age 15. As a result of what was happening in my early life, my mental health just deteriorated and I had no tools for how to support myself. I had the good fortune through a mental health hospital that I was checked into to be connected to a therapist who taught me how to meditate. It was way before there were apps on cell phones to help you with your mindfulness practice. I was embarrassed that I did it but I took to it like a duck to water and it gave me the ability to pause and start to make little micro-decisions that were more empowering, more optimistic, [and] more positive in my life.

[Nanea then gives her account of the grief she experienced after losing both her sister to a drug overdose and her husband, who died of terminal liver cancer.] It just took everything from me. There was a lot of loss that started with my sister and just kept snowballing. What I saw in that grief period that I was emerging from and looking at “How do I build my life for myself going forward with a broken heart?” It was in that contemplative space that I could see our meditation practice carry us through one of life’s biggest challenges, which is to watch someone you love go through the end-of-life transition, and I knew that I could build on the success of a career in the games industry, a foundation of a lot of love, a huge friends community, and the sense of myself as somebody who can get things done.

It was this idea to take the benefits of video games and mindfulness structures and bring them together in this respite to create a solution that could help people get to what I had been supported by for many years much more quickly. I had that idea and I got really excited about it and brought in some people I had worked with. We started prototyping ideas and went and pitched [them] to a venture firm. When I met Tim Chang at Mayfield Fund he said, “I’ve been waiting for someone to walk in and pitch me this idea. Let’s do it.” That got us off and running.

ATN: What is your greatest accomplishment?

Nanea Reeves: There’s so many. First, I think surviving and building a wonderful life for myself and my marriage was amazing. What I’ve done after that I really think is my own accomplishment and achievement. I have a new life now that has a dog I’m crazy about, TRIPP. I feel like I’ve found my purpose in life. This is going to be my thing. Everything that happened before this prepared me to run this company.

ATN: Where did you get the idea for your current business?

Nanea Reeves: The idea for TRIPP emerged after a period of loss [to] thinking about how [I wanted] to rebuild my life on my own after losing my husband, and I wanted to do something with my efforts that would have [an] impact in the world.

ATN: When did you know you had something of substantial value?

Nanea Reeves: The real moment for me was during the pandemic when we saw our usage numbers go up. We were on the gaming platforms on Oculus and PlayStation, so it was primarily [a] young male audience and we would get these inbound emails from our users telling us how much it was helping them during a very stressful time. Not only helping them, but their entire families were using the application to manage their stress. That’s when I knew that we had built something special.

ATN: Where do you see yourself in 20 years?

Nanea Reeves: 20 years? I don’t know! [laughs] In ten years, I can see TRIPP being much more evolved in the area of digital therapeutics targeting different mental health issues, working with academia in the medical community to use our technology platform to create interventions that can address specific issues. I could see that actually being a bigger part of our business than our current consumer business.

Our goal really is to be a brand that people feel a connection to and they feel safe with and they feel supported by our offering. If I can continue to do that over the next 20 years my life for me was a success.

ATN: What are some of your daily habits?

Nanea Reeves: As soon as I sit upright I say an intention. I have a painting of the Buddha of compassion and I just set an intention to try to be kind and think of others. The reason why I do that first thing when I sit upright is my default is to think only of myself and my own happiness and so at least I’m starting my day with a moment of thinking of others. It gets my mind right on being of service.

I do a meditation practice. I do that even before my dog and my boyfriend get up. I try to work out as well because it’s [the] mind, body, and heart connection [that’s] really important. Working from home I do try to keep my physical environment well balanced. I move out of my office and sit outside and take a break. I think the most important thing that I do is every hour I try to stop and sit for five minutes. If you do that consistently you can get a full 45 minutes to an hour of extra meditation time throughout the day. I found that really changed my whole mindfulness practice when I started doing that.