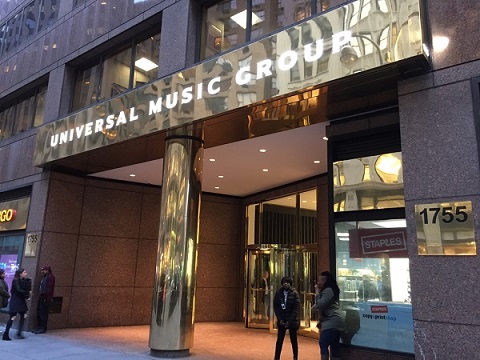 Playlists have been a legal and creative hassle for online workout companies. The deal between Universal Music Group and Variis represents a breakthrough.

Subscribers to Equinox’s Variis service of online classes will soon be able to work out to hits from Lady Gaga or the Smashing Pumpkins or Johnny Cash or 2pac or Paul McCartney or Fatboy Slim — and many, many, many other artists from a vast range of eras and genres whose music was released on one of the labels of the Universal Music Group.

Equinox reached a licensing agreement from the music behemoth, according to The Wall Street Journal. Universal Music Group, one of the “big three” of music conglomerates, amassed such major and historically important labels as Capitol, Motown, Virgin, Island, Def Jam, Interscope and Geffen under one roof. Variis will have licensing access to their rich catalogues. The amount and exact terms were not disclosed.

Universal Music Group and Variis’s deal shows how digital fitness brands can resolve the problem of adding the kind of playlists that were common to in-person fitness classes, if they have pockets as deep as Equinox’s. The issue has worried large and small online instructors since the proliferation of online classes as the COVID-19 pandemic closed or made people cautious about gyms.

In February of 2020, Peloton learned, from a lawsuit, that it could not simply slip songs into instruction videos as easily as a yoga teacher or aerobics teacher can make a Spotify playlist and connect their phone to the studio’s speakers.

To play music at an event or in a public space (like a grocery store) one needs a performance license from at least one of the big four providers, any of which would provide a large array of well-known recordings. This law applies to in-person fitness classes but was widely ignored by small and mid-sized venues. (Who is going to enforce it?) Embedding a song in a video requires an even more costly synchronization license, which the creator would have to negotiate with one or several people who own rights to a song. This applies equally to Hollywood films and YouTube tutorials.

The Variis and Universal Music Group deal is the first to give an online fitness streaming service a huge range of well-known and obscure music on tap, possibly allowing for instructors to use them as background music in class or for subscribers to queue up their own favorites themselves to play as they work out.

The Universal Music Group was at the forefront of the effort to prevent a free-for-all of unlicensed music use on online music videos; the megacorporation once fought an eight-year battle against a YouTuber over a 29-second clip of her year-old son dancing to Prince’s “Let’s Go Crazy.”

However, the pandemic may have zapped some other revenue streams from music copyright holders. The closure of public places and the lack of events mean fewer companies need or use performance licenses. The stalling of TV and movie productions is probably equating to fewer synchronization licenses. Music labels may be more amenable to making to help online fitness platforms find a solution to the problem than they were a year ago.